“Carol killed herself last week.” Mark stunned me with the news about his ex-wife. “I went to her funeral,” he said. “I felt afraid of how her family and friends might treat me. She had told them so many bad things about me. I thought they might not want me there. But I went anyway.

“When I got there a woman came over to greet me. She was warm and loving. She held my hand and said, ’Carol’s at peace now.’ I was surprised by her voice. She sounded just like Carol. For an instant I thought she was Carol.

“What do you think?” he asked. “Could it have been Carol’s voice? Has she become an angel, and was she there to comfort me?” 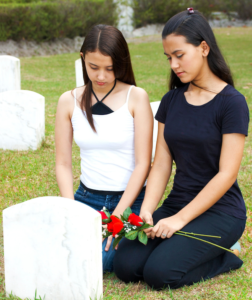 Do people become angels after they die? Does God allow our loved ones to die because He needs more angels?

Questions like these arise from our desire to make sense out of death – to find some relief from grief as we face the sad vacuum left when someone we care about is gone. The belief that the dead have moved on to a better life certainly offers more comfort than the belief that they are in hell.

But if the writers of the Bible could get together and send a greeting card to someone mourning the loss of a loved one, it would probably bear these words of Paul which he initially addressed to the Christians in the city of Thessalonica:

“We do not want you to be uninformed, brethren, about those who are asleep, that you may not grieve, as do the rest who have no hope. For the Lord Himself will descend from heaven with a shout, with the voice of the archangel, and with the trumpet of God; and the dead in Christ shall rise. Therefore comfort one another with these words” (1 Thessalonians 4:13, 16, 18 NASB).

This passage is consistent with the teaching of the whole Bible on the subject of life after death. People do not become angels when they die – not even very good people. Instead, they “sleep” in the grave (“sheol” or “hades”) until the resurrection.

Angels are a separate order of being. See Psalms 8:4, 5: “What is man, that thou art mindful of him? and the son of man, that thou visitest him? For thou hast made him a little lower than the angels, and hast crowned him with glory and honour.”

There are both good and evil angels. The Bible contains a brief report of a terrible conflict between the two groups. “And there was war in heaven, Michael and his angels waging war with the dragon. And the dragon and his angels waged war” (Revelation 12:7, NASB). The dragon is Lucifer, the angel who became Satan, leader of the rebellious legions. The battle ended with Satan and his hordes being driven out of heaven.

We know that Jesus was an eyewitness to the event, for He testified, “I beheld Satan as lightning fall from heaven” (Luke 10:18) The demons that Jesus confronted during His earthly ministry were none other than Satan and his cohorts. Powerful beings, they are still active today. They will finally be destroyed in the same lake of fire in which all who reject God’s grace will meet their ultimate punishment.